The need to maintain international contacts and negotiate between representatives of different peoples is steadily increasing, and, consequently, the need for translation is increasing. Demand grows – so does supply. The more translation companies and freelance translators offer their services, the more acute is the question of the quality of the translation services provided.

Among the main criteria for assessing the adequacy of a translation, first of all, it is worth highlighting the ability to most accurately select the equivalent of a lexical unit in the target language from those offered by the dictionary. This ability is an essential component of the professionalism of a translator. Moreover, the question is not only whether a specialist can choose the desired option for a given document, but also how well the translator is oriented in a particular area of ​​knowledge, as well as the style and genre of the text. Indeed, when working with texts of artistic, journalistic, technical and other directions, one should be guided by different principles. 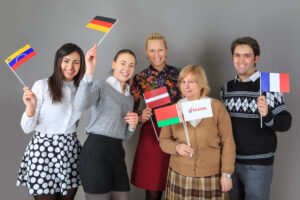 Psycholinguists argue that, in addition to factors such as academic performance and knowledge in a particular field, the gender of the translator also has a significant influence on the choice of vocabulary. Studying the abilities of both sexes helps to get an idea of ​​which topics are stronger for men, and in which – women.

For the purpose of such a study, scientists attempted to establish the gender characteristics of the choice of vocabulary options by translators of both sexes when translating texts of various orientations by determining the psycholinguistic and cognitive-pragmatic specifics of the presentation of information. To do this, for six months, researchers monitored undergraduates of the Faculty of Romance-Germanic Languages. The experiment involved two groups of students: girls and boys, 20 people each. In the course of the research, they received assignments to translate texts of technical, journalistic, artistic and other topics. The texts were of different lengths and contained lexical units that caused indisputable translation difficulties in terms of their role in context or attachment to a particular topic, style, and so on.

The analysis of the results revealed that the differences in the choice of the translation option are indeed determined by the gender of the specialist. The following are specific examples of the findings from the observation.

When translating problematic constructions with the words “as”, “because”, “considering”, “during”, etc., the correctness of the choice of the equivalent by the girls was 20% lower than the correctness of the translations of the guys. The male half preferred to replace problematic combinations with neutral constructions or those that facilitated faster and more correct translation. Psychologists explained this tendency by the fact that abstract thinking is more characteristic of men, and it was this that helped them cope with such difficulties, although women have a larger vocabulary, however, the main thing is the ability to use it.

In translation practice, the correct definition of keywords plays an essential role, since it affects the further perception of the context. During the experiment, it was revealed that women tend to keep the first translated term in their head and build a context system around it, while the male group selected analogs corresponding to the industry (mechanics, construction, aircraft construction, etc.). When changing parts of speech, male students were better at observing the appropriateness of contextual connections.

When translating texts on technical topics, scientific articles, the girls were much less guided in this area of ​​knowledge and used less diverse equivalents of industry-specific terms. In addition, the male half understood the meaning of the sentences better (a difference of 8%), as evidenced by the correct choice of the vocabulary variant.

In the course of work on non-fictional texts and political articles, the two groups showed approximately the same results. That is, no significant differences were found in the perception of the material and the correctness of transmission in the target language. A similar level of translation adequacy indicates a similar awareness in political and social events.

An interesting tendency was noticed among the female half in the course of performing tasks on literary translation: some representatives of the female group allowed themselves to indicate alternative translation options in parentheses. Naturally, such actions are unacceptable in translation practice. Again, psychologists attribute this phenomenon to women’s inherent insecurity, while men are inherently more self-confident and focused on self-control and results. These qualities allowed the members of the male group to resolutely and boldly use the option that they considered correct, although it did not always turn out to be so.

Another notable feature of women’s work on a text of increased complexity was the tendency to omit the problematic lexical unit in case of difficulties in finding an equivalent. In 50% of encounters with such difficulties, the girls removed conflicting units from the text, while the men’s group in 100% of cases selected more or less adequate and equivalent translation options.

In general, it should be noted that the strategies of the female and male groups differ radically: the girls omitted what they could not cope with, however, their chosen translation options in most cases corresponded to the correct ones, and the male half each time confidently applied what seemed to be correct equivalents. , which, however, were less successful in terms of the objective correctness of the translation.

According to the results of the analysis of the study, psycholinguists make the following conclusions. In translation, the choice of a dictionary version of translation is determined not only by knowledge in the field of translation theory, but also by psychological characteristics inherent in the orientation of men and women in everyday life. Men, in comparison with women, tend to be specific and are more interested in the technical sphere, and this, as it turned out, leads to the tendency to use the translation option, which, in their opinion, is the only correct one and does not require alternatives (in this regard, the example of women indicating the spare the options in brackets are very indicative). In addition, men showed better variety in the use of industry-specific text equivalents better than women. On the other hand, women’s indecision often helps them to more carefully approach their professional activities and more successfully choose objectively correct translation options.

Thus, gender differences in translation activities not only exist, but also affect the quality of translation. It is undeniable that in the technical field men are better at translating. As for the humanities, women need more time to make decisions when choosing equivalents, however, they are better able to recognize shades of meaning and, therefore, more successfully cope with the task of literary translation.

Of course, these statistics are not applicable in all cases. There are many excellent examples of male literary translations. And among women translators, there are those who, thanks to their persistence and many years of experience, can easily compete with men in the field of technical translation.